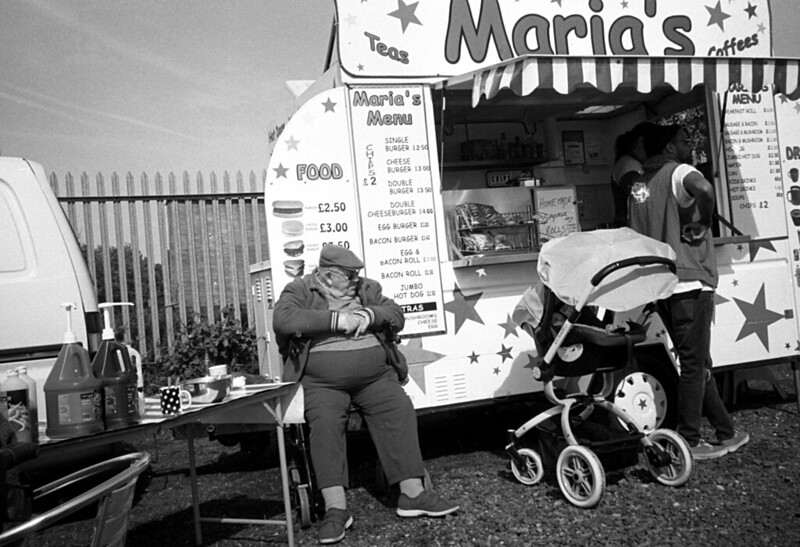 The two Ilford films from the XA2 (the 50p Camera Project) are dried and scanned.  The above is one of my favourites.  A candid taken at the burger van of a local mid week car boot sale.  I think that it captures the atmosphere of such an event quite well.  Car boot sales, auctions, and Sunday markets are great places to catch interesting people.

I developed in D-76 stock, which might have made the HP5 a little grainy, but as any regular readers will know, I don’t shy away from the rough.  It adds I think to the feeling of the photograph.  Anyway, I wanted to use the developer up, as it wasn’t well stored, and I’m keen to give a bottle of Ilford LC29 a go next.

I guess that is one of the attractions of film and even hybrid photography – we have so many different films, developers, and processes available still, each of which will affect the final image.

Next in the XA2 will be a couple of Poundland C41 films. 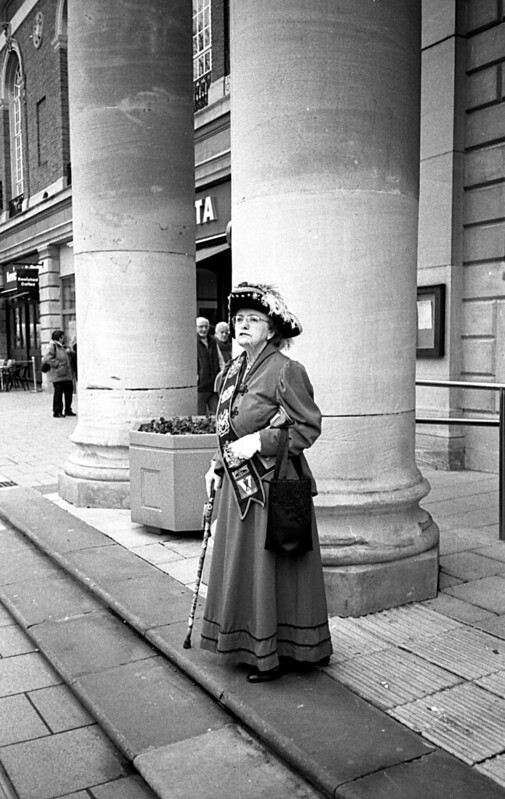 First film exposed in my old Olympus XA2 for a while, giving rebirth to the 50P Camera Project.  Ok, I’m still trying to get exposure correct.  Subject was the Town Crier for Peterborough.  Came across her, with XA2 in coat pocket.  Chatted to her and took a few random snaps.  She has been the town crier in Peterborough many years.  She did retire from the post in 2007, but was asked to come out of retirement to fill a vacancy. 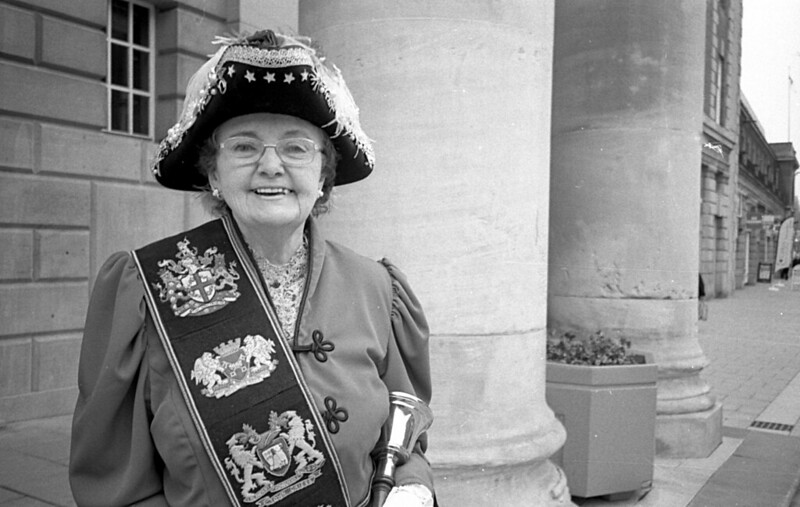 On a 50p camera and one quid film. Taken on a car boot sale bargain – the Olympus XA2, and AgfaPhoto Vista Plus 200 film from Poundland. Discount photography v Canikon fanclub.

My 50p XA2 camera hasn’t laid totally dormant.  Ok, it was replaced for a while by the sexy Pentax SP500 Spotmatic, and it is looking a bit battered from previous pocket usage – but I did recently load it with a Poundland C-41 film, and return it to my coat pocket.  The idea being to check if this poor abused camera (last film, I dropped it onto the floor of a KFC in Cambridge – back door flung open), and it’s zinc battery were still functioning – and then to get a photolab to process the C-41 film in it’s full colour.  I really cannot be asked to process C-41 again.

Then I keep seeing bloody cracking street photography on the Flickr photostream of Alistair Prentice.  That really is not fair.  Now I’ve had to go and buy some new 35mm film – just when I thought that I couldn’t be bothered with it – he reminds me of just how much fun can be had with a 50p Olympus XA2 pocket camera.  Bugger.

Mind you. I’ve also ordered some tasty Ilford Delta Pro 400 in 120, for when the Shanghai GP3 just doesn’t do, and some Kodak D-76 developer, which I’m told, works out cheaper than Ilford ID11.  We’ll see – calculations will follow.  The order was placed with AG Photographic just now.  Let’s see how that processes.

Looking Down. As above image.

Looking Down. As top photo.

Looking Down. As top image

Well the one use camera project failed – but while Nita was snapping away with a light leaking dog toy, I was using Poundland film in my trusty little Olympus XA2.  This film costs me a quid a roll of 35mm.  Labelled as AgfaPhoto (to distinguish it from the defunct Agfa) Vista Plus 200, it’s rumoured to be a repackaged variant of Fujifilm C200.  Incredible value colour film.  However, I’m not yet inspired enough to try and develop C41 film.  But I do have plenty of Ilford B&W chemicals and a Paterson tank.  I can get it commercially C41 process developed at a local photo lab or two, but that’s more expense, and I’m trying to be the tight fisted photographer.  To be honest, I could get it developed only (no prints) at one local photo lab for only three quid a film.  Tempting, but it’s nice to DIY isn’t it?

The negatives are ugly, and you need to tweak the scanner to produce results on digitalisation.  I scan using my Epson Perfection V500 set for color negatives, but saving as 16 bit greyscale images.  A bit more tweaking post scan on Gimp, particularly on Levels.  I think that’s passable b&w film photography.  A quid a roll and cheap b&w home developing.  Cheapskate tight fisted film photography, and with the 50p compact camera!

Talking about Poundland film, I have recently heard rumours that some stores are temporarily retailing 36 exposure AgfaPhoto Vista Plus 200, rather than the 24 exposure films.

A few years ago, Poundland stores were selling a mixture of colour 135 film types, but shifting to the AgfaPhoto brand.  At first, this was not a problem, as they were 36 exposure films, incredible value for GBP £1.00.  A local photo lab would C41 develop them for me (no prints) for £2.50 a film – regardless of 24 or 36 frame.  That worked out to an incredibly cheap rate of 8p per exposure – cost of film and developing!  I did buy quite a few, but when new supplies reached the stores a year ago, they were replaced by 24 exposure films.  Still great value, but less exposures for your pound.

I recently ran out of 36’s, and started to resort to 24’s, when I heard the rumour.  My local Poundland is still retailing the 24’s.  However, on a visit to Kings Lynn today, I popped in the Lynn branch …. and there sat a box with twenty beautiful AgfaPhoto Vista Plus 200 36 exposure 135 films!!!  Of course I bought the bloody lot.  The box underneath were 24’s.  Sorry Kings Lynn cheapskate photographers, I raided your supply.  Twenty quid for 720 x 35 mm exposure frames.  Now that’s tight fisted.

The above photo taken with my awesome little Olympus XA2 that I bought at a car boot sale for 50p (circa USD 70 cents).  Seems to produce well on Ilford HP5 Plus.  Other news?  I’ve now home developed over thirty films.  This evening I cross processed two 35mm C41 films with Ilford b&w chemicals – in the same tank together, another first.  I’ve really got a hang of simple straight forward b&w film developing by now, although reeling 120 film can still be a curse.  Anyway, another new photo from the XA2 below:

I think that the Olympus XA2 has proven itself by now.  What do you think?  I know, I know, it’s not a Canon or Nikon full frame DSLR, but I think it’s a cooler camera.Other news?  I bought a 135 film of AgfaPhoto from Poundland today.  The box had been opened, and it was reduced to 75p HA HA ha hah hah….

Funny really, you get a day out, and then don’t take many photos!  Still, took a few, with my default pair of cameras these days – both film cameras loaded with Ilford HP5 Plus – the Bronica SQ-A medium format SLR, and the nimble Olympus XA2 pocket 35mm camera.  What a pair of beauties.  I mean the cameras.  Above, a photo of Naomi and Ricky, excellent company for the day’s adventure.   Below, a classic steal of a photo courtesy of the ickle XA2 – I stole it from the official tog on Millennium Bridge as I piggy backed him with the little camera.  No idea what the photo shoot was about, but it’s a great XA2 capture.

On the Millennium Bridge, with St Paul’s in the background. No idea what these dudes were doing, I opportunistically piggy backed some tog’s photoshoot quickly with my little pocket wonder: Olympus XA2 compact 35mm camera. Ilford HP5 Plus film Developed in ID11

I’m really enjoying the dark room learning curve at the moment, but I still have plenty of cheapskate colour 35mm film from Poundland, which I take to a local independent commercial processor to run through his mini-lab.  He presently charges me £2.50 for developing negs only – no printing.

I’ve used so many car boot sale cameras over ther past year, but it might surprise people, that if I had to choose just one to keep, it would by my lovely little Olympus XA2 compact zone focus camera, that I purchased for 50p at a car boot sale.  It is such a fun camera – great for street fun – capturing odd moments or sights.  Discreet, small, quiet.  Close and open the clam shell lens cover and it defaults to a medium zone focus.  It’s not such a bad camera for the countryside neither.  Here are two photos that I’ve recently ‘snapped’ with the Olympus XA2!

Click on either image to view a Flickr set that I’m proud of – Poundland film in a 50p camera.

With a 50p camera and Poundland film!

Taken a few weeks ago or so in a local field of barley. Nita cuddles Flint as the barley wraps around them. Using an Olympus XA2 35mm compact camera that I paid 50p (GBP £0.50 circa USD 77 cents) for at a car boot sale. Loaded with Poundland budget film – AgfaPhoto Vista Plus 200.

I love my little Olympus XA2.  It’s a genuine pocket camera that can be carried anywhere, and its a 35mm FILM camera.  Who says that film is expensive?  I paid 50p for this camera with it’s d.zuiko lens and three zone focus simplicity.  It’s my pocket camera of choice, the camera I carry when I carry no other.  I visited a car boot sale at the weekend, and Nita suddenly commented “oh, you don’t have a camera on you”.  I winked, “oh yes I do!”.  Amateur budget photography rocks…

Taken with the ickle little Olympus XA-2 zone focus 35mm compact camera. This one bost me 50p (GBP £0.5) at a local car boot sale. The film? Quid roll of AgfaPhoto Vista Plus 200 from Poundland. Stuff that EXPENSIVE Canikon DSLR, see what £1.50 can do Hah hah hah hah!

I came across another photography blog the other day, that made me take stock a little.  I think that I’ve become a little too side tracked by all of these old film cameras that I keep acquiring.  I’m on a technology (albeit old technology) learning curve, but I think I’d like to get back to improving my photography now.  That means actually planning out some photography and ideas.  I need to stop ‘testing’ newly acquired film cameras for a little while.  Over the past few months, I’ve acquired a number of working film cameras, each one had to be tidied up, tested, used, and I guess, experienced.  These cameras include  a Pentax ME Super SLR, a Kodak Retinette IIA, two Olympus Trip 35’s, two Olympus XA-2’s, and now a Lubitel 166B TLR!  I’ve been so busy learning how they work, and testing them, that I’ve not had much time to try out new ideas.

To be fair, it’s not just the distractions of the cheap cameras, I’ve been busy working for a living.

I bought a notebook.  I want to use it to actually plan out some photography, and to start logging what I have done.  I need to get some time to start that.  I know that I certainly want to try some portraits using the Lubitel TLR and 120 film.  But I need to stop the snapshots, and create something more worthwhile.

Talking of snapshots, the two photos here are both from the 50p Olympus XA-2, using Poundland film of course!