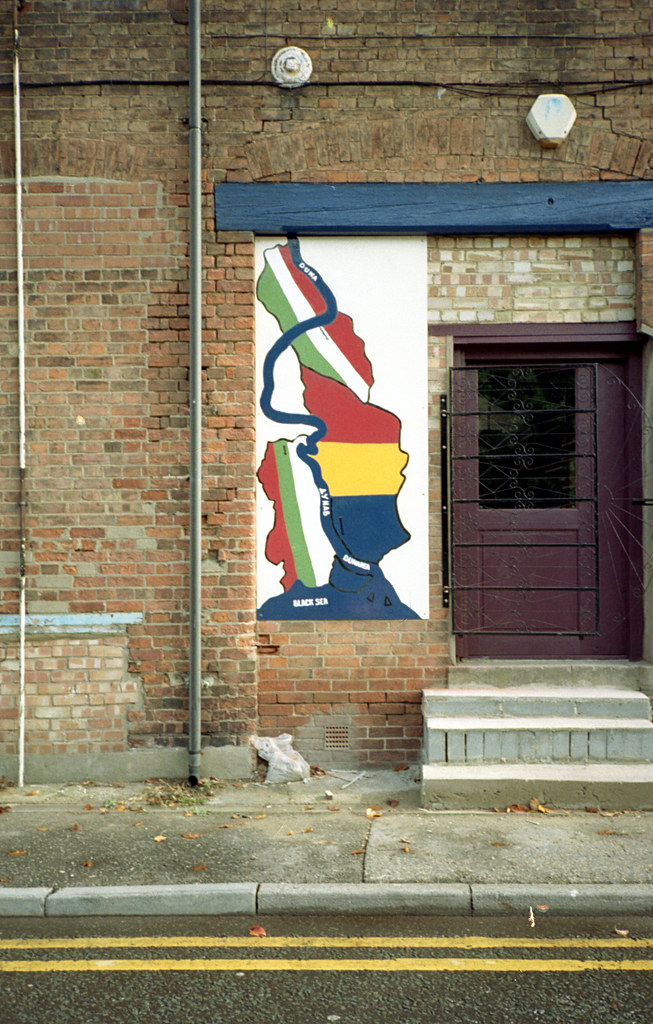 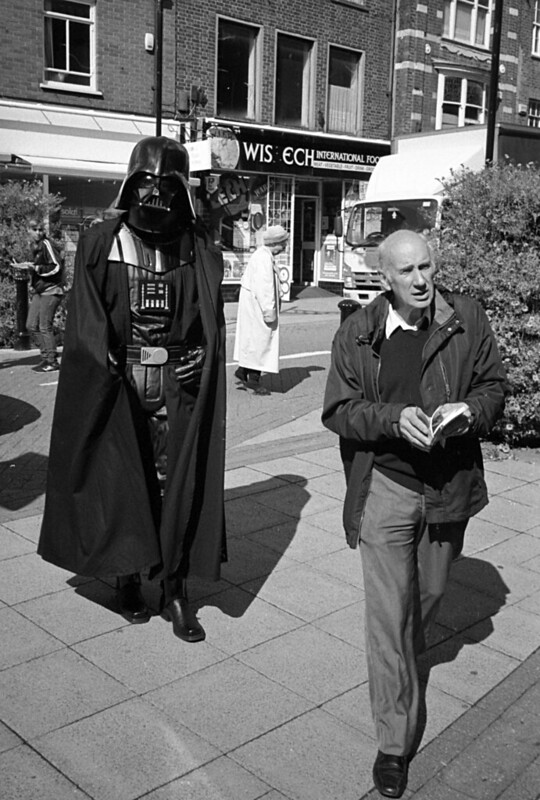 Caught during a heritage day in Wisbech.  I have no idea what Star Wars has to do with local heritage.  Lucky though, I had my 50p camera in my pocket.  You never know what you might bump into.  I quite like the lady in the background. 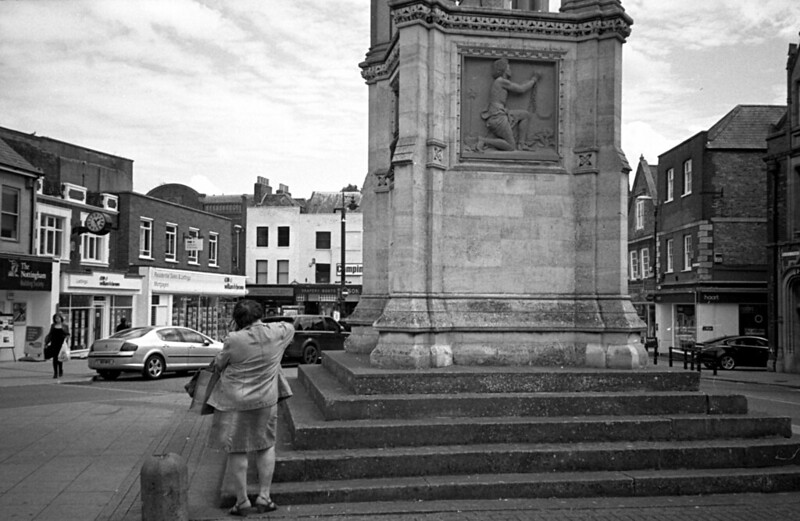 Apologies first for being a Flickr and click whore.  I’m well aware how shallow and meaningless that is.  So don’t go thinking that I’m not concerned myself, how we are all directed to respond to Likes and Faves in our day to day life.

That out of the way, I’ve selected the above photo for this post.  It’s one that got away on Flickr.  Not much in the way of clicks or likes, but I “like” it myself.  I guess it is the opposite phenomena to some of my photos that have made it into the Flickr Explore category, even though I think that they are horrible.

This photo is part of the 50p Camera Project – having been taken on my humble and very abused Olympus XA2 compact camera.  It was taken in Wisbech at the Thomas Clarkson Memorial.  Clarkson was an English slavery abolitionist, born here in Wisbech.

I’m not sure what the woman’s posture was about – probably struggling to use a mobile phone while carrying shopping, but it seems to me to say something with the image of a manacled slave next to her.  What it says is up to you. 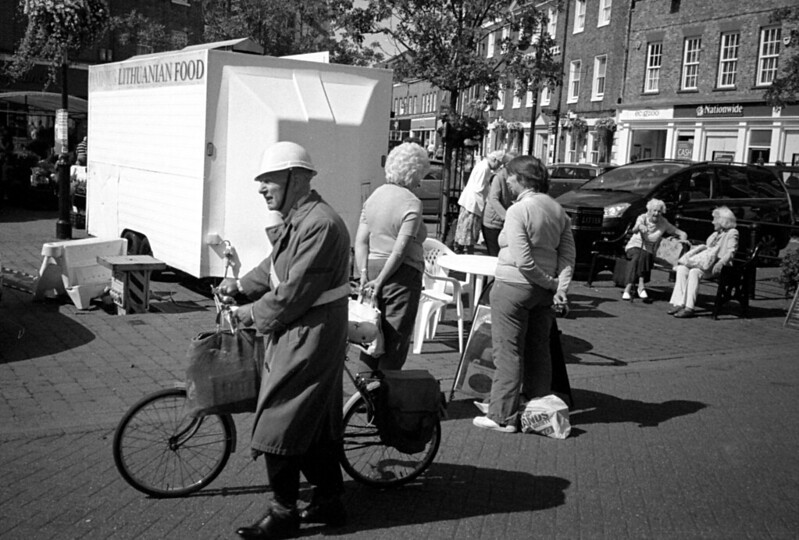 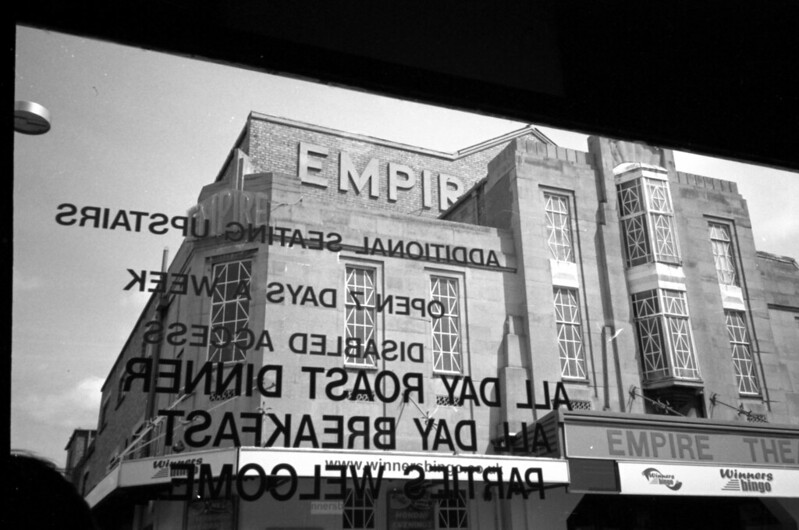 The Empire Strikes Back

This follows on from my last post, in which I discuss Eric Kim’s excellent blog post: How to be Happy in All Circumstances in Photography.  Eric didn’t just discuss happiness in relationship to Gear constraints.  He also discusses happiness in photography, in relation to other constraints such as location and available time.

We don’t all live in a Mecca of Street Photography, such as New York.  I’ve been guilty of this one myself.  I live in the sticks, the provinces.  Crap end of the English Fens.  Not exactly urban decay.  And yet, what an idiot that makes me.  Who said that Street needs to be urban big-city?  When I open my eyes, I’m living on the edge of a small town that has clearly seen better, more lucrative times, when it was a port on the Wash.  In addition to the local decay, the town is full of local English characters, blending nicely next to crowds of recent immigrants from across the European Union.  I have tonnes of local material, who needs New York?  I can capture history, I can try to capture the feeling and atmosphere of small town provincial Eastern England. 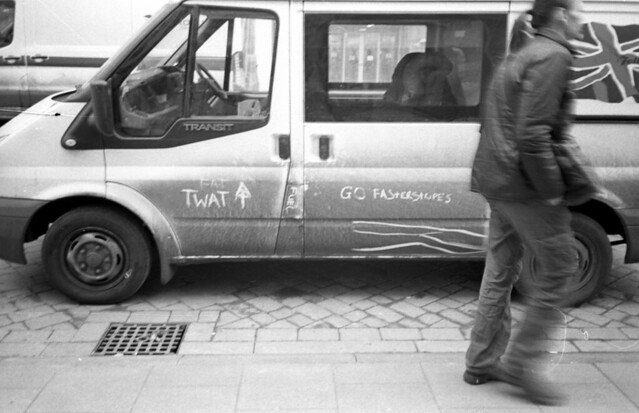 The point is to enjoy doing this.  To make photography fun, hopefully sometimes creative or aesthetic, but also to have fun.  Some people might feel the need to buy the latest Canikon fullframe DSLR, complete with a suitcase of lenses, and of course, a whopping big Canikon emblazoned camera back pack.  But do they really have more fun than I do with my battered 50p Olympus XA2 pocket camera and home developed b/w film?

This is kind of leading me to that other sought after thing – personal style.  I feel that a lot of people miss out on this point. They are often subconsciously directed by the media, to produce the same sort of images as each other.  Shiny, sharp, beautiful colours.  Heavy post process software manipulation – you can see where many follow the same guides and tutorials from the same magazines and websites.  Maybe I’m being unfair to criticise this school of photography.  Perhaps because I am such an untidy, messy, archaic person in Life – this messiness and imperfection shows in my photography.  I simply can not be bothered with creating the perfect still photography.

So that is my style – as I am.  Messy, politically conscious, interested in people, and of course tight fisted.  All photographs on this post taken with the battered 50p Olympus XA2 pocket camera and bathroom developed b/w 35mm film. 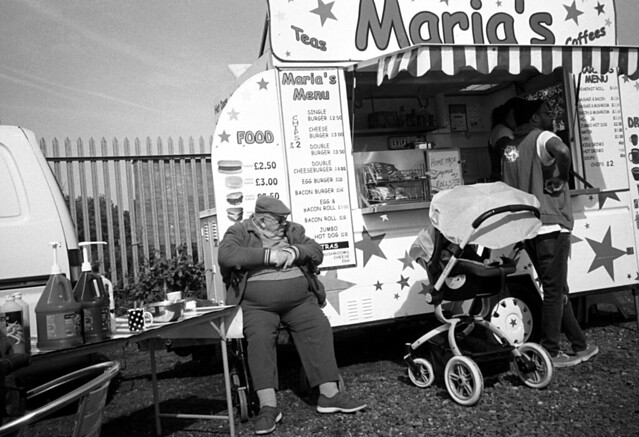 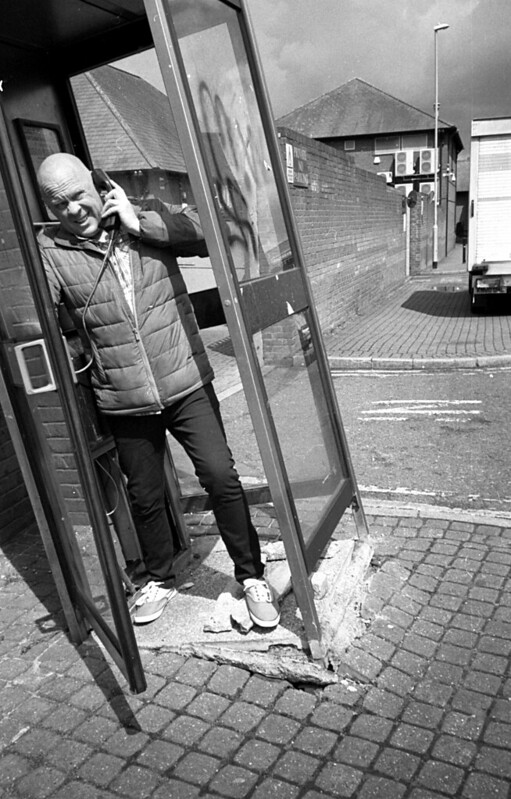 Our intrepid reporter phones in the tight fisted report.  The 4.2 magnitude tremors of the Kent Earthquake yesterday were felt far and wide.  Causing damage to structures as far away as Cambridgeshire.  Either that or some drunk managed to back his car into this Wisbech telephone box.

The fun that you can have with a little XA2 35mm film compact camera. 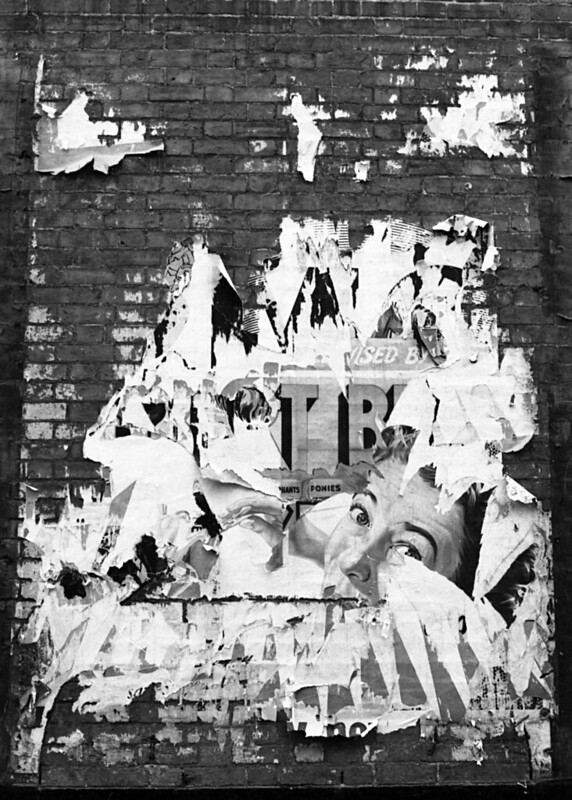 I like this one.  I think Nita noticed the antiquity of the shredded advertisement posters first.  We were walking down one of Wisbech’s old alleyways – this leading from the river, to the old market, when she spotted what we all pass everyday without seeing.  I had to step back into the back doorway of a nightclub, in order to frame it through the Super Takumar 55mm lens.  Just after I pressed down the shutter release on the Pentax Spotmatic, I was pushed in the back by a cleaner exiting the club. 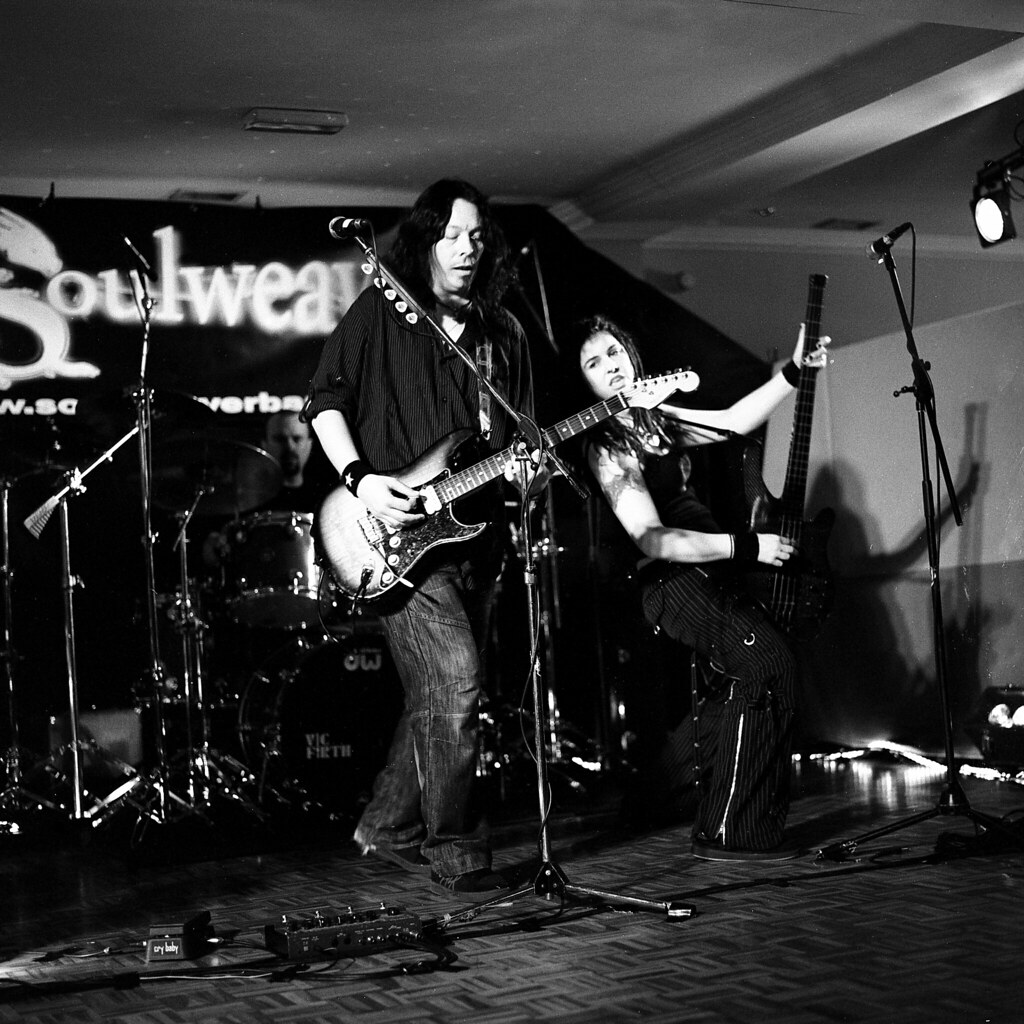 A temporary break from the Poland travel photography (I still have several 120 rolls of Ilford in the fridge to develop and process).  Yesterday, we found something to do, despite the dreary English weather.  A nearby hotel by the name of Elme Hall, hosts this rather unusual but excellent local rock and blues club, that usually commences at 4 pm on a Sunday afternoon.  Who says that nothing ever happens in the Fens?  It’s an unusual time of the day to watch local guitarists do their strut, and stranger still, they have a break during which sandwiches and …. roast potatoes (?) are served.  The bar is of course open throughout the event, and it can be a rather pleasant way to spend an otherwise dreary Sunday afternoon and early evening.  Rock n roll, ale, and roast potatoes.

This week was the turn of a three piece heavy rock band from Cambridgeshire, by the name of Soulweaver.  Lots of their own material, clearly lots of experience and skill, and yeah, some very good covers – even successfully braving a bit of Hendrix.  They got away with it very well.  I took the Bronica loaded with Ilford HP5.  Band lights were surprisingly strong on the faces either side.  I set aperture to f2.8, and tried shutter speeds of 60 and 125 (too much jumping around for 60).  Developing was straight with ID11.

There is actually a nice edge to these local bands, in that, unlike professional groups and venues, you are usually free to take and use any sort of camera that you wish.  I had to smile when I recently visited the Parlament venue in Gdansk, Poland, to see the established Polish heavy rock band TSA.  I asked the door if photography was permitted only to be politely declined.  I left my camera at home.  But as soon as the band appeared, up came the Iphones and smart phones. 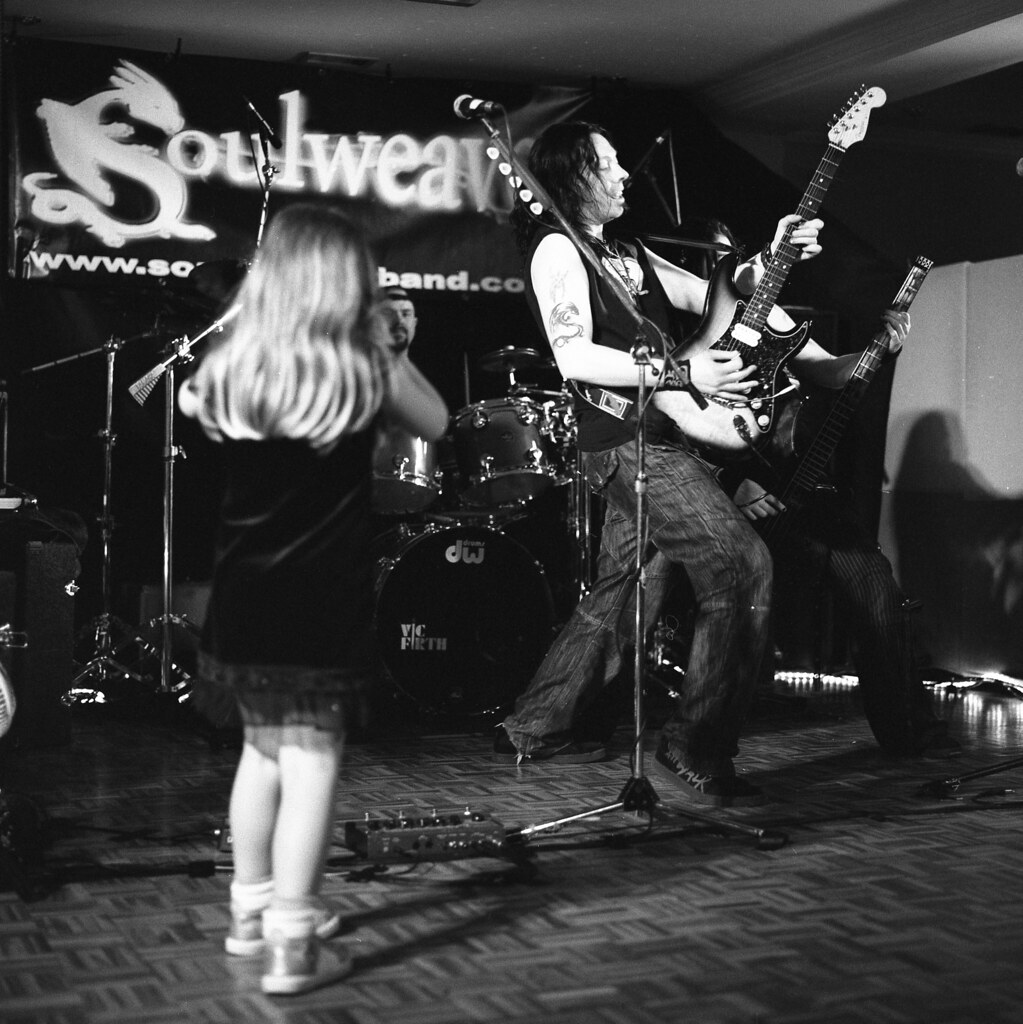 This of course is the curse of using DSLRs and any serious looking camera that doormen and security personnel regard as “professional”.  I had it a few years ago on the London Tube.  I was warned not to take photographs for terrorist reasons.  Yet, later in the day I witness smiling tourists flashing away on smart phones.  Now, if I was a terrorist, wouldn’t I conceal a small digicam, even a spy cam, rather than be caught on CCTV sporting a big fat “professional” camera?  Logic rarely prevails in this post 9/11 World.  But I’ve digressed.

Apologies for the clown photos, I know many people find them scary, but I’ve always found them funny.  Managed to finish a roll of HP5+ in the Bronica SQ-A yesterday.  This one also dates from the local Christmas fair a month ago.  Maybe a slower shutter speed might have given more sense of movement to the juggling clubs, but using the sunny F16 rule alone on a fully manual camera, it’s easy to see mistakes later.  Otherwise I think that it makes a nice B/W medium format photo.

Roll on the Clown Apocalypse!

Clowns at the Christmas Fair in Wisbech.  From the FoolHardy circus in Norwich.  Joe Fool, and his partner Cosmo Hardy.

A place in Explore, and over 11,000 views, and 180 faves for this image on the Flickr website yesterday.  Well I liked this one, so I’m glad that others do as well.  It was a good strip of film.  I’ve started pre-soaking my film in water at developing temp (or slightly above), and it’s probably just me or a lucky film, but the grain looks really nice.  As I’m moving towards Colour film and C-41 developing, I’m having serious second thoughts!  I’m liking my home developed b/w so much!

On the C-41 front, I’ve found an online article, based on my Digibase chemistry kit, using stand processing. The method develops C-41 at a lovely familiar 20 C, with minimal agitations, but very, very slowly.  It sounds safe, and I think I can manage that better, so when the time comes, I’m probably going to use that method.  My dark room notebook is starting to dry out (since I dropped it in water), and I need to start writing a C-41 plan stand processing plan.  Not too sure that I fancy bleach bypass though.  Meanwhile I also need to do two other things.  1) take some photography, and 2) find some nice 5 litre drums to store chemicals in.

Always looking for a new angle.  I hear that following Selfies, that Footsies are set to become the next in pose.  So I’m trying to get ahead of the trend setters.  Happy New Year to all.