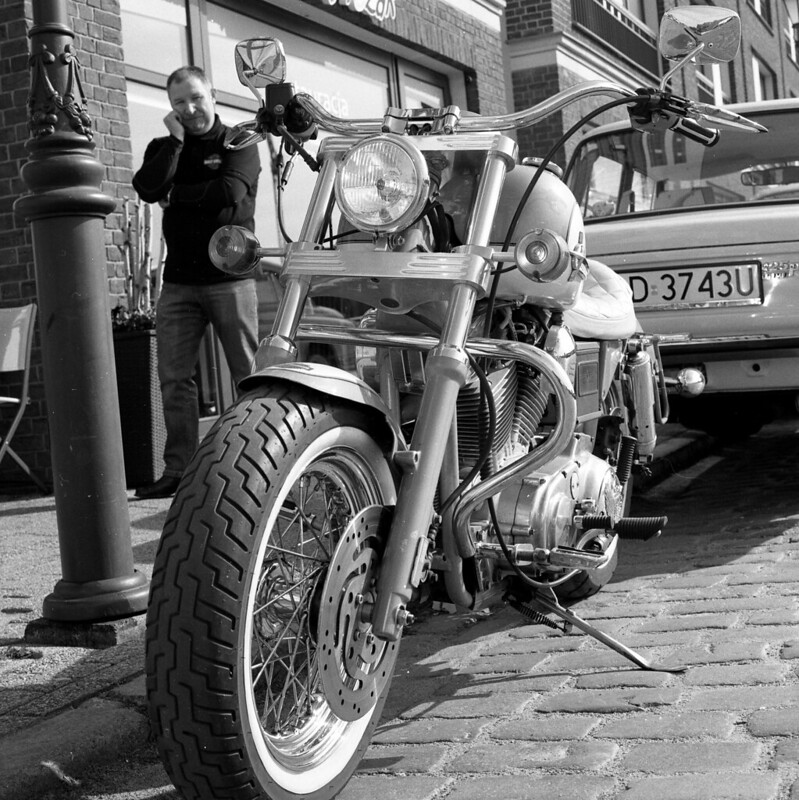 Can you guess why?  Sometimes it all just works really well.  Such as in the above photograph.  Ok, it’s a long way from a perfect image, but it works enough.  What is medium format film photography

Chances are your entry level DSLR has an electronic sensor somewhere in the APS-C range.  Although larger than the average sensor in a compact point & shoot digi camera, it’s still pretty small.  Indeed it’s named after a similar size frame of film named APS, that was introduced by Kodak late into the Age of Film.  It was considered a miniature sized film, and was not popular with enthusiasts.

Subsequently, a certain value has recently centred on higher range DSLRs that feature so-called Full Frame sized sensors.  This sensor is a similar size to a frame of 135 or 35mm film.  Funny thing is, at one time during the Age of Film, even this was considered to be a “miniature format”.  Still, does size really count?  Well some think so.

Long before 35mm film was even introduced, the popular format of film for amateurs was the 120 roll.  Amazingly, this format was introduced way back around 1901 by Kodak.  It’s a fat 6cm wide film, backed and protected by a roll of paper.  Some 113 years later, it’s still manufactured by several companies in a variety of emulsions.  On my Bronica, Lubitel, and Agfa medium format cameras, it exposes a square frame of 6cm by 6cm.  That’s an area of more than four times that of 35mm film or a digital full frame sensor.  With a decent bit of glass, it potentially captures a lot of detail.

My latest photo in Flickr Explore.  I’ve seen far better from others not make it into Explore, it really is a mystery.  Taken on my infamous 50p car boot sale camera, a pocket friendly Olympus XA2, loaded with FirstCall 400S film.  It was the first time that I’ve used this film.  Resold by a UK based photographic supply distributor called FirstCall, the plastic 135 film cassette states that it is made by Agfa-Gevaert Belgium.  It’s a low budget b/w film, only costs a few quid a 36 exposure film, which is about as cheap as I’ve seen for true black and white film recently.  Development times were a bit long – ten and a half minutes in full ID11 stock.  Not sure if I like it, it ain’t HP5 +.  Still it is cheap, so might buy some more.  Certainly suits budget 35mm cameras as a true b/w film.  I don’t really like cross processed C-41 in Ilford results.  They leave too much to the digital scanner to correct.

I’ve settled for another film process project.  I’ve not yet tried alternative home recipe developers.  I’ve been looking at Caffenol, the umbrella name given to home made developers based on coffee granules, and usually vitamin C powder, and washing soda.  I’ve even bought a jar of cheap coffee ready for the project.  Where am I going to get the other ingredients here in the UK?  Couldn’t see vitamin C powder or washing soda in the superstore just now.

Other news?  Ok, Iain Stewart is right.  My recent medium format exposures have been poor – often over-exposed, sometimes under-exposed.  Thing is, I broke my only light meter.  It was a cheap old Capital selenium thing that I got at the local car boot for 50p, after three Sundays of haggling down with some travelers (I can be tight fisted).  So I’ve ordered a similar used but this time, a Soviet light meter (a Leningrad 8) from an online auction site.  Hope it arrives before my flight to Gdansk!

With a 50p camera and Poundland film!

Taken a few weeks ago or so in a local field of barley. Nita cuddles Flint as the barley wraps around them. Using an Olympus XA2 35mm compact camera that I paid 50p (GBP £0.50 circa USD 77 cents) for at a car boot sale. Loaded with Poundland budget film – AgfaPhoto Vista Plus 200.

I love my little Olympus XA2.  It’s a genuine pocket camera that can be carried anywhere, and its a 35mm FILM camera.  Who says that film is expensive?  I paid 50p for this camera with it’s d.zuiko lens and three zone focus simplicity.  It’s my pocket camera of choice, the camera I carry when I carry no other.  I visited a car boot sale at the weekend, and Nita suddenly commented “oh, you don’t have a camera on you”.  I winked, “oh yes I do!”.  Amateur budget photography rocks…

Please forgive the background of kitchen cupboards!  We really need a better studio or background – but I am the tight fisted photographer after all!  Finished work this afternoon, and some late Spring light left.  We had to do something.  Well, Nita has her favourites, but I like these two.  The above shows her feminine petiteness , her shoulders, and her cute  hair.  The below uses more blue channel (I use channel mixer in UFRaw for b&w conversion) which tends to hit detail and tone harder – this can age skin but beauty isn’t just about the unblemished.  I added contrast in curves and in levels, and used Unsharp filter to increase detail.

The result is that my working male hands look so old against her skin – contrast.  She suggested the title of “Dirty Old Man”.  I prefer Lust.  I am older than her though.  Just need a better background.

An opportunistic photo.  A young lady took them to the school gate for socialisation at the end of school day.  We had been on our own dog walk, and were picking up my partner’s daughter from the school.  I had my Pentax ME Super on me – the one that I had bought for £10 on Ebay.  Loaded with a Kodak Color 200 roll for a trial before changing light seals.  This was one of the last rolls of Kodak film from Poundland – only AgfaPhoto Vista Plus 200 now remain.

Since scanning the negative, I’ve touched up the dust and levels a wee bit using Gimp 2.8.  Still, what do you think of this budget photograph?

Why do people want to photograph like a ‘professional’?  I’d rather not photograph weddings and stock photos. Viva la amateur!

My wild red rose gave me her heart

I expect you to give me everything. Sony A200 DSLR. Sony DT 35mm SAM F/1.8 prime lens. Edited in open source UFRaw software.

… but still, it was not enough.

All beauty must die. As above image.

As I kissed her goodbye, I said, ” All beauty must die”

Taken in today’s snow.  Broke and stuck at home, nothing like a bit of cheap photography to use up the time.  No girlfriends were harmed in the making of these photos, but my lamb heart stir fry was.

With absolutely no money at the end of the month, thought we’d use a DSLR to take some couple photos.  That doesn’t cost anything does it?  Taken yesterday in Wisbech Park.  Had to take advantage of those beautiful leaves from the Fall.

Another rainy afternoon off work, with nothing to do.    Light was incredibly poor today.  We visited the Poundland and 99P discount stores earlier, and found these pretty little paper butterflies.  I saw what I wanted to capture instantly, and I think it works – with a little help from Nita of course.  I shot digitally using the Sony with it’s 35 mm prime lens fitted.  I had to raise ISO sensitivity to 400 due to the poor light.  I shot in manual with the aperture pretty wide open to between F1.8 and F2.2.  It sometimes makes the DoF too sharp, but I didn’t really have a choice.

Life can be terrible, bloody weather.

Edward, the coolest cat and my son, posing for me in Kings Lynn. Shot on Pentax ME Super 35mm SLR, Pentax-M 50mm lens, Ilford FP4+ 400 film

Not long after buying a cheap used D-SLR, and entering ‘serious’ photography (I say that with tongue in cheek), I encountered the photography phenomena LBA (Lens Buying Addiction) and GAS (Gear Acquisition Syndrome).  I think that I’ve avoided falling into those traps to an extent anyway.  When I buy an DSLR, I’ve learn’t that frequent change of lens equals damaged sensor.  Anyway, it’s better to master one prime lens than to be slave to a back pack of lenses.  Yes, I’m a prime lens fan.

However, more recently, I’m finding it difficult to avoid collecting gear, as I encounter the  COFSOCCBSCSV (“cheap old film SLR and other cameras in car boot sales and charity shops virus”).  I really do try to resist.

Enough of that.  This blog is about camera love.  What camera do you love throwing over your shoulder.  Which one do you carry in the car everywhere – maybe even shopping or to work?  You just love it on your shoulder.  The past three month for me it’s been a thirty year old 35mm film SLR Pentax ME Super.  So smexy, my god, it’s cameraphilia.  I love it for it’s quaint polished metal looks, the classic prism casing, it’s small over-the-shoulder size, the minimalist leather strap (must stop talking sex).

My sexy Pentax ME Super fitted with even sexier orange filter for Ilford B&W’s.

So what camera do you just need to carry?  Come on, come out cameraphiles across the World!