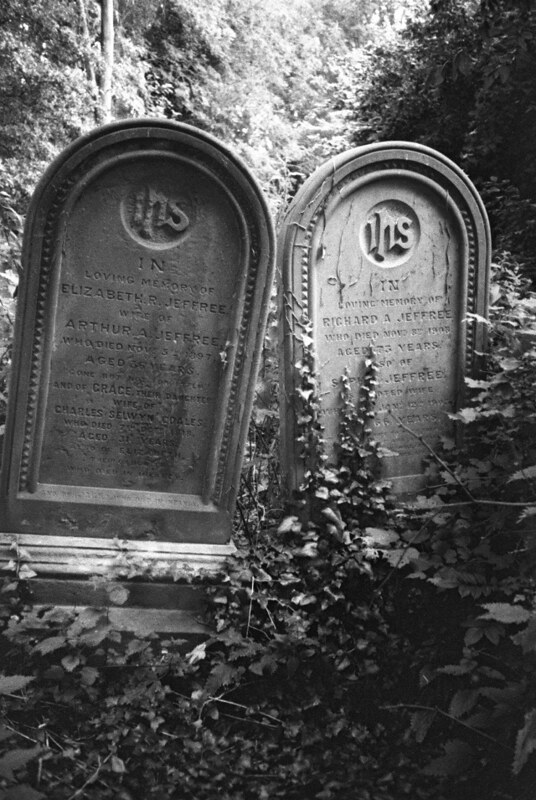 I recently asked on a photography forum for a developing recipe to cross process C41 with b/w chemistry.  I was tickled, but a little chuffed, when someone answered by giving me a link to an old post about the subject …. from one of my own posts here on my blog!

I hadn’t cross processed Poundland film to b/w for a year or two, and when I did, I used Ilford ID11.  This time I wanted to use a rodinal / R09 developer, and I fancied stand processing.

For the Digital / N00b crowd.  What am I talking about?

The stand process that I ended up using this time was that as suggested by the Massive Dev Chart for XP2 C41 in Rodinal / R09.

The recommendation was 1:100.  Yes, a pathetic 3 ml of Agfa Rodinal for a single 35mm film in my Paterson tank.  The recommended time at the optimum 20C was 120 minutes.  I put my used Poundland film in the tank.  Added the very diluted Rodinal, gave it several inversions, then sat it down with a few taps to dislodge air bubbles.

I then took Anita out to the local flea pit (cinema) where we watched the Pixel movie.  I returned maybe 130 minutes later.  Emptied out the developer, stopped, fixed, and rinsed.  Hung up the slippery brown thing to dry.

The above image is one scan.  I did enhance the levels a little on the scanned image, using Gimp software, but not that much.  I worked out that 3 ml of my Rodinal cost me about 8p (GBP £0.08).  The film a quid from Poundland.  Altogether, film, develop, fix, and scan cost me no more than £1.30.

One more thing.  This isn’t just about process and cost.  How does the image look?

I had an APS film handed to me.  Found film that had apparently been used and then forgotten, only to be noticed by Nita while her father was redecorating his house.  I can’t really remember much about APS.  It dates to the late 90s, when Kodak heralded it as an advancement on 135 (35mm film).  It was promoted as a smart format, much in the way that Kodak Disk film was.  Looking rather like a 35mm film cassette, only with an oval cross section.  This one was Kodak Advantix Ultra (expired in 2001), Advanced Photo System (APS).

Nothing to lose, I attempted to crack it open in my film changing bag.  Bottle opener didn’t work, so cracked it open from the film exit using the handle end of a tea spoon.  Then went to spool it onto the developer reel.  Uh oh!

Now I understand.  APS was a smaller film than 35mm.  Enthusiasts didn’t like it.  Not only was it smaller, capturing less detail than even 35mm, but you couldn’t squeeze an extra frame or two on them (as with 35mm), and the Kodak processing units would pull them out for developing and scanning – then roll them back into the cassette, so no nice cut negatives were not returned with the prints – just the cassette.  Then it clicked with me.

All of this hype in the photography world today about sensor size.  When manufacturers started to produce DSLRs that were practical for the first time, the largest sensor that was also affordable, was comparable in size to an APS exposure frame, but smaller than a 35mm.  So they called this sensor size APS-C (Advanced Photo System – Classic) after the hated APS film format.  Later, they could manufacture sensors as large as a 35mm film exposure, but for now, at a price.  Up to now, this has become the choice of many professional photographers, but as prices start to drop, so more and more enthusiasts are entering the market for them.  The 35mm sensor size is marketed as “full frame”.  So, when they start to produce larger sensors, within the medium format film size range, at affordable prices (I know that they already manufacture medium format sensors for incredibly high prices), what are they going to call them, if 35mm is marketed as “full frame”?  Maybe “extra frame”?  The irony is that when 35mm film was originally introduced to the still photography world, some photographers regarded it as too small to be of serious use.

But getting back to my APS film in the changing bag.  It was too small for even the smallest setting on my adjustable Paterson spool.  So it was either try to proceed without spooling it, or give up on it and chuck it away.  I decided on the former.  I loosely dropped it into the tank, sealed it, and tried cross process developing in Ilford b/w chemicals.  I added extra developer, and agitated every 30 seconds.  As it turned out, I seriously over developed.  The digital scanner couldn’t even see the images they were so grainy and extreme.

Still, I could see enough to rediscover the forgotten images of Nita’s brother, to Lands End, Cornwall in 1999.

Looking Down. As above image.

Looking Down. As top photo.

Looking Down. As top image

Well the one use camera project failed – but while Nita was snapping away with a light leaking dog toy, I was using Poundland film in my trusty little Olympus XA2.  This film costs me a quid a roll of 35mm.  Labelled as AgfaPhoto (to distinguish it from the defunct Agfa) Vista Plus 200, it’s rumoured to be a repackaged variant of Fujifilm C200.  Incredible value colour film.  However, I’m not yet inspired enough to try and develop C41 film.  But I do have plenty of Ilford B&W chemicals and a Paterson tank.  I can get it commercially C41 process developed at a local photo lab or two, but that’s more expense, and I’m trying to be the tight fisted photographer.  To be honest, I could get it developed only (no prints) at one local photo lab for only three quid a film.  Tempting, but it’s nice to DIY isn’t it?

The negatives are ugly, and you need to tweak the scanner to produce results on digitalisation.  I scan using my Epson Perfection V500 set for color negatives, but saving as 16 bit greyscale images.  A bit more tweaking post scan on Gimp, particularly on Levels.  I think that’s passable b&w film photography.  A quid a roll and cheap b&w home developing.  Cheapskate tight fisted film photography, and with the 50p compact camera!

Talking about Poundland film, I have recently heard rumours that some stores are temporarily retailing 36 exposure AgfaPhoto Vista Plus 200, rather than the 24 exposure films.

A few years ago, Poundland stores were selling a mixture of colour 135 film types, but shifting to the AgfaPhoto brand.  At first, this was not a problem, as they were 36 exposure films, incredible value for GBP £1.00.  A local photo lab would C41 develop them for me (no prints) for £2.50 a film – regardless of 24 or 36 frame.  That worked out to an incredibly cheap rate of 8p per exposure – cost of film and developing!  I did buy quite a few, but when new supplies reached the stores a year ago, they were replaced by 24 exposure films.  Still great value, but less exposures for your pound.

I recently ran out of 36’s, and started to resort to 24’s, when I heard the rumour.  My local Poundland is still retailing the 24’s.  However, on a visit to Kings Lynn today, I popped in the Lynn branch …. and there sat a box with twenty beautiful AgfaPhoto Vista Plus 200 36 exposure 135 films!!!  Of course I bought the bloody lot.  The box underneath were 24’s.  Sorry Kings Lynn cheapskate photographers, I raided your supply.  Twenty quid for 720 x 35 mm exposure frames.  Now that’s tight fisted.

The Rear, showing Dog Attack. Will it leak light? Taken with Sony as above image.

I’ve had this one-use or disposable film camera laying in the bottom of a box for a while.  It came with a few other disposables, very expired, but that Nita used with great success, and with a pristine Kodak Box Brownie (Flash III) that I’ve since used with re-rolled film onto 620 spindles, and with a broken Konica S3 rangefinder.  I bought the box at a car boot sale.  I sold the Konica for parts or repair, and that alone made a decent profit from the box, so I guess that makes the price of everything left as nil.

At some point, this camera fell within range of the lurcher’s mouth.  Not the first time, even my trusty XA2 has dog teeth marks.  It got a fair chewing, as you can see from the above photos.

Yesterday was a day off with little to do.  Nita proposed a budget film photography outing, with “looking down” as a theme.  Why not I thought.  I loaded a Poundland film into my 50p Olympus XA2.  Nita also has an XA2, but for more challenge, she picked up this old disposable.  It’s a Kodak Ultra one-use camera with electronic flash, assembled in Mexico.  It only expired around sixteen months ago.  A little Internet research suggests that this camera might be only around six years old.  The film consisted of an unusual Kodak GT800 – 5, a colour film at ISO 800, unusual for Kodak, it seems to have been produced only for disposable cameras such as this one.  I guess that the high speed allows for small aperture, and a longer depth of field to focus on.  I did express my concern at the dog chew marks, that it might light leak – but what’s to lose?

Off we went, around a few local villages, and then the town of Wisbech for a “looking down” photo tour.  Me with the XA2, Nita with the Kodak Ultra.  Then back to the dark room, or rather the bathroom, for developing.  I’d already decided that in order to keep our project as tight fisted and cheapskate as possible, that I would cross process the films, using my Ilford b&w chemicals.  Both films together in the Paterson System 4 tank.

I’d not developed a disposable/one use camera film before.  A quick look on the Internet revealed that they usually reel the 35mm film INTO a 135 style cassette, as you use them.  A reverse of a normal 35mm camera, where you advance it out of the cassette, then when it’s fully used, manually rewind it all back into the cassette for removal (with the exception of course of motor driven winders).  So, in theory, the film should all be safely in the cassette.  Was it?

Kodak Ul;tra One Use Camera. Taken with Sony as above.

Yes.  I smashed open the camera with my usual care, and as can seen above, Nita is holding the cassette of used Kodak Ultra film with the sorry remains of the camera in the background (battery of course, safely disposed of).

Now to the developing.  Bit of a mismatch gamble.  To save time, I processed it WITH the AgfaPhoto Vista Plus 200 film, out of my XA2 – Poundland film.  Kodak 800 and AgfaPhoto 200, unlikely to share the same developing times.  I was also cross processing as I said above – hand developing using Ilford ID11 and b&w process.  I diluted the ID11 stock to almost 1:3 ID11 to water one shot, at 20C.  I developed for 22 minutes, with 10 seconds inversions per minute.  Followed by stop, generous fix, and extended Ilford style rinse.

Well my prior fears were correct.  Light leaked to hell, freakin’ dog!  Should keep his bloody teeth to himself.  Ah well.  Funny thing is, most passable scan from the negative was of his Highness himself!  Funny really.  See below: