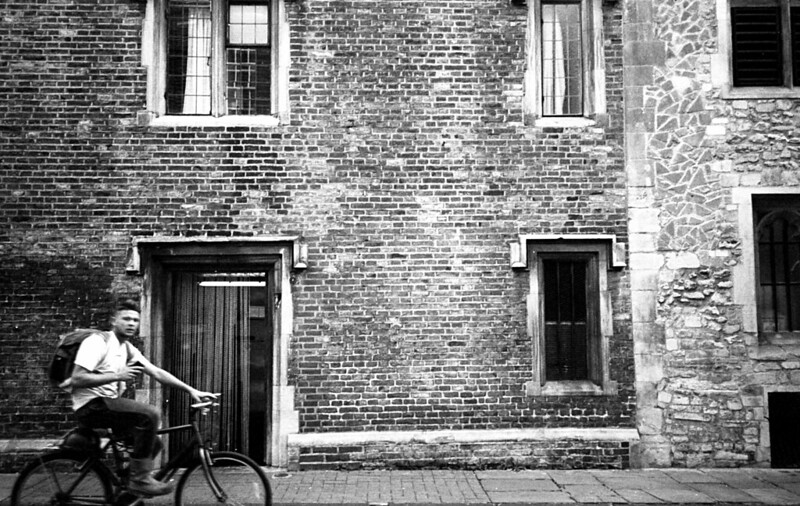 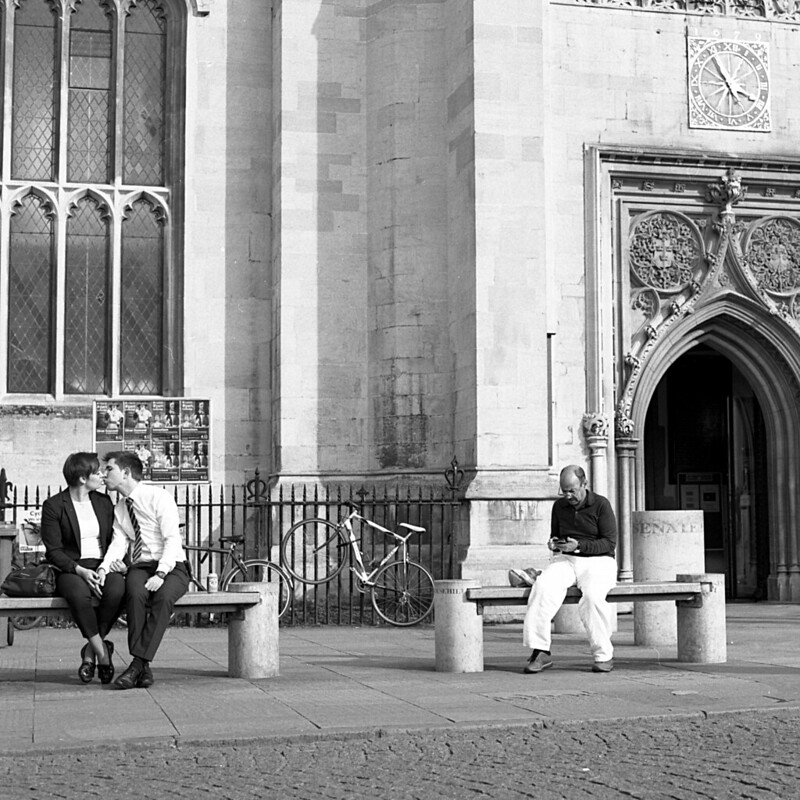 Time does not stand still.

I made this photograph last week in Cambridge.  I caught the kiss just right, I didn’t know that until I developed and scanned.  Some have suggested that I should have cropped tighter, but I actually like it with the 1679 clock.  To me, that suggests that time moves on for us – from the age of lovers, to the age of fiddling around with a smart phone.  As has been noted – even the bicycles are up to it.

Captured onto Ilford Delta Professional 400 film, in my Bronica SQ-A, fitted with a rather wide PS 80mm f/2.8 lens.  Developed in LC29. 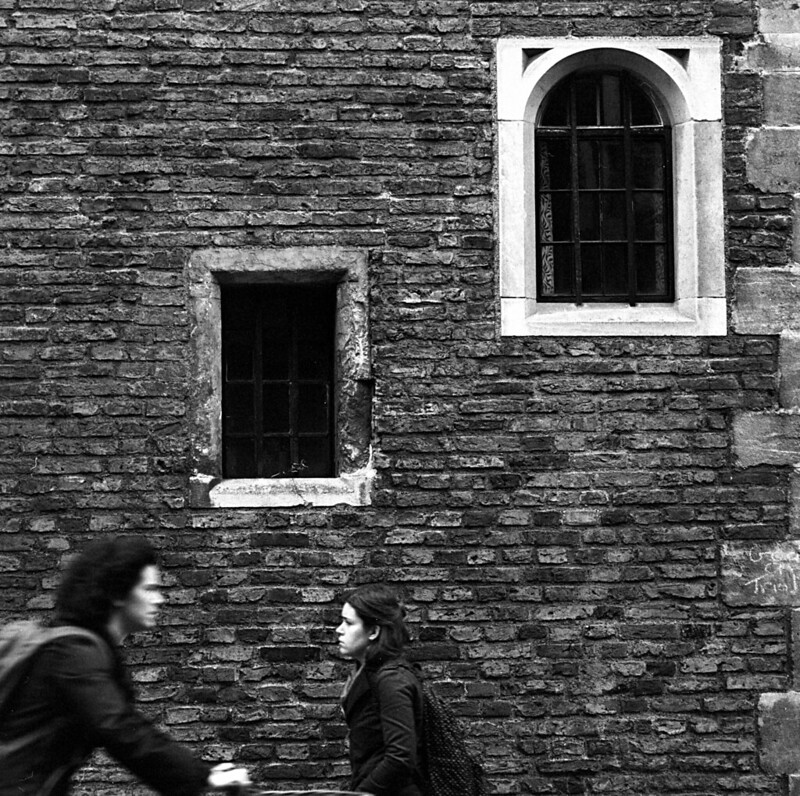 I took the above photograph in Cambridge yesterday.  I like to think that it was inspired by the Geometry in Henri Cartier Bresson’s photography – although I’d be insulting him by making any comparisons with my meagre snapshots.  Still, lesson learned Henri – think Geometry a little more.  HCB did it almost automatically – he would say that his brain, eye, and camera worked as one.  However, he did study art for some years, with a tutor that insisted on geometric correctness in his paintings.

I quite like this photo.  The heads of the students match up as with the above windows in the old college building.  The girl walks as if towards the cyclist – in motion blur.  Technically, I’m quite pleased as it was exposed onto the Czech budget 120 film – Foma Fomapan Action 400.  Light was really poor that day, and my shutter speed was probably selected at 250 – hence the blur of the cyclist in motion.  Developed in Ilford ID11 watered down to 3:1 – I’m such a cheapskate. 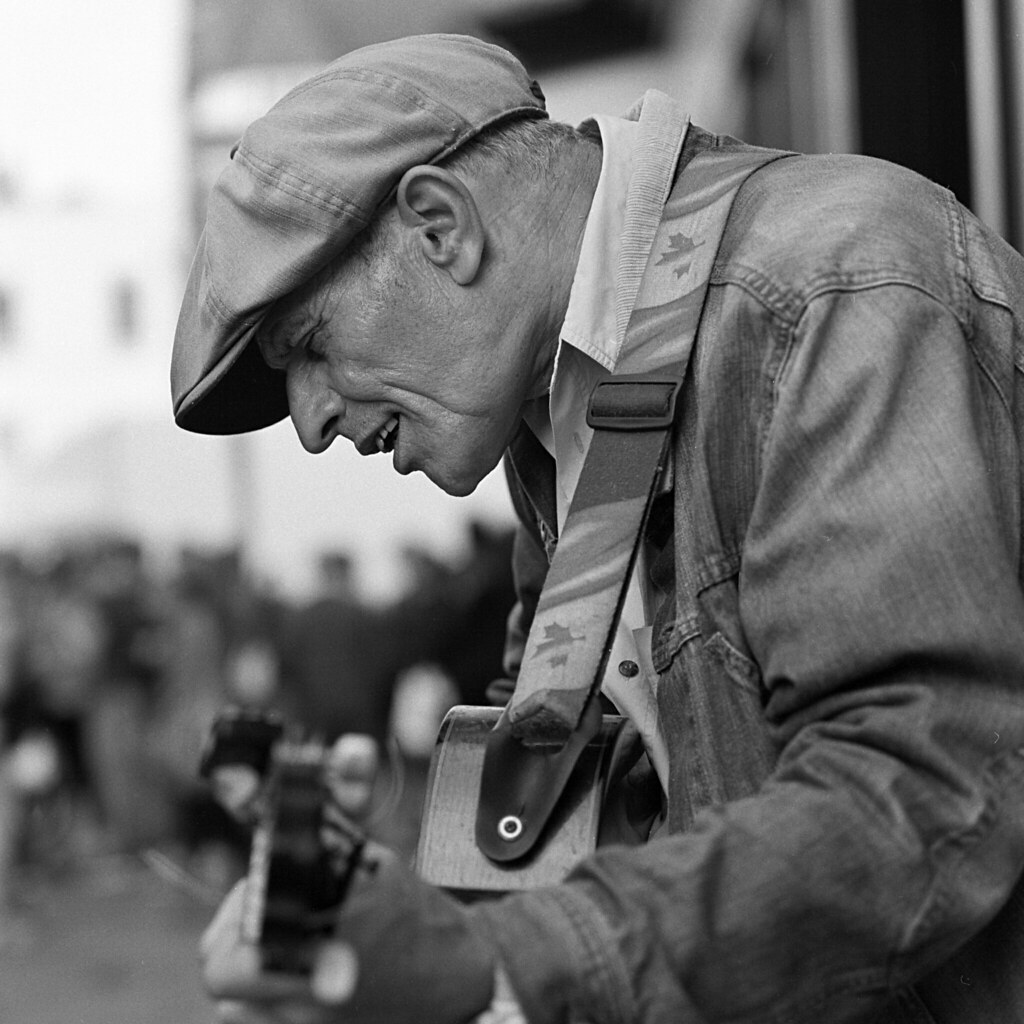 Feeling a bit disillusioned with the infrared film, following some grainy negatives, so I took a day out with the good old Bronny for some street photography in Cambridge yesterday, and wasted a few rolls of Ilford HP5. 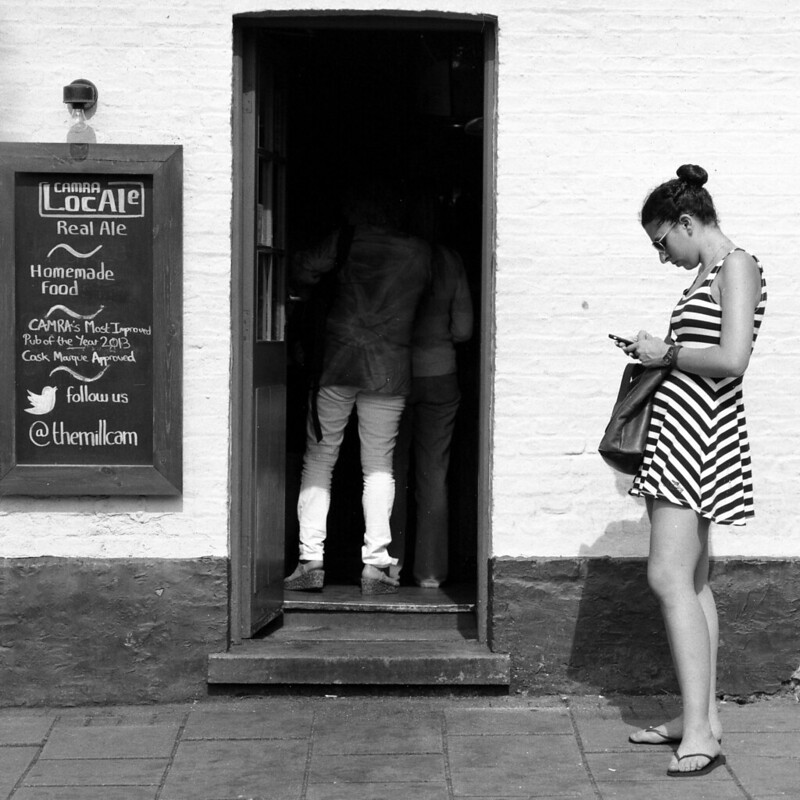 While I was busy travelling back and forth to Cambridge, to buy then return that dodgy DSLR, I at least had a chance to have a few stalk around walks with the Bronica, on the streets of Cambridge.  Mission was to try and to capture the atmosphere of Cambridge – colleges, students, tourists, and … class.

It’s not so easy to stalk street photography with a huge and very slow Bronica by your side – but it is fun.  There is definitely an element of looking down that is less confrontational than holding up an eye level camera.  No light meter used other than eye and brain – I apologise for the poor exposures.  Still, did Vivian Maier always have a light meter with her?  Film media at hand were some rolls of cheap Foma Fomapan Creative 200 in 120 medium format.  To be developed mainly in FirstCall R09.  Foma Creative is described as a traditional, no frills B/W film, and is manufactured in the Czech Republic.  Although I do try to support Ilford, and their materials are a higher quality, I do actually like Foma, and I like to have some in the fridge.

So, here you are …. Cambridge. 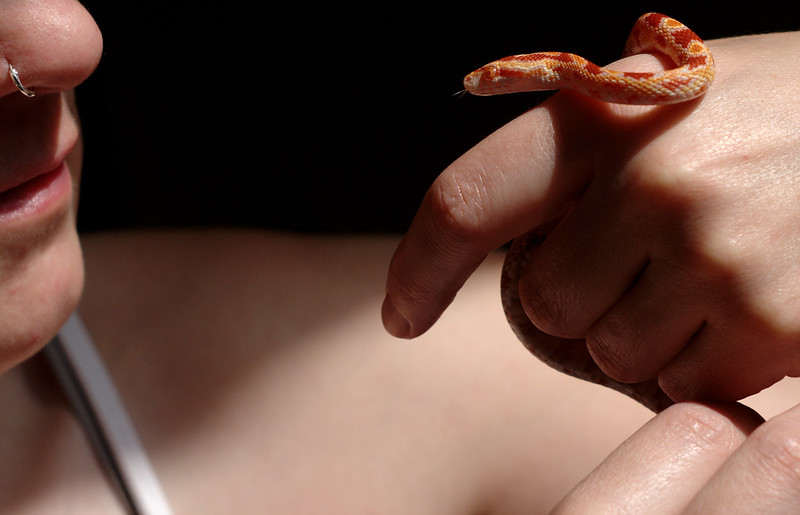 You might get the idea from this blog that I’m some sort of hard core film photographer, hell bent for analogue.  Well, sure, film gives me a lot, but I really would like a nice DSLR.  I’ve got two old DSLR cameras – a Pentax K110D and a Sony A200.  None-the-less, these two rarely come out to hunt light these days.  They’ve been replaced by 120 and 35mm film.

Ok, confession time.  I was vulnerable to comfort impulse buying.  I’d had a domestic disagreement, and ended up in Cambridge – looking at the window display of a second hand gear shop.  There was this sexy looking Pentax K20D, body only, looking back at me.  Two hundred quid – more than I’d normally spend, more than I’ve ever spent on a camera.

I walked away with it – leaving behind the happy young salesman (who clearly didn’t know cameras), with his reassurances ringing in my ears that “impulse buying is usually the best buying”.  Indeed, on the bus to the Park & Ride, it did indeed, appear to be a better camera than either of my two previous DSLRs.  A rugged weather-resistant exterior, well built with locks for the covers, a top viewer.  And still spared of that horrible function “video”.  Burst mode was a bit wow, the 14.6 Mp impressive, anti-shake mode built into the body, usable ISO to 1600 – and dynamic range!  I started to fantasize how it would perform on my classic SMC Pentax-M 50mm f/1.7 lens, and quickly configured the settings to allow manual aperture ring operation.

Would it replace my film photography?  Of course not!  On returning home, making up with Nita, and fitting that lens, I recoiled at the vulgar easiness of instant imagery.  The next morning we took a few window light images with our baby corn snake, then took it on a trip to the nearby market town of March.  I noticed on preview and zoom that a black horizontal line appeared on play back images.  I hoped that this bug was restricted to viewing on the camera.

On returning home, I opened the RAW images on UFRaw.  That freaking horizontal line scored across the images.  The sensor was buggered.   A check online confirmed my diagnosis.  Someone on a Pentax group suggested that it was an aging effect, and that these issues could be a common problem for older digital cameras in the future, as their sensors fail.  Shit, if my film fails, it’s fine on the next!  I drove back to Cambridge with legal haste.  The shop accepted the return based on a technical fault within their 48 hour slot.  Money back to the bank.

I’m sorry that I forgot you film photography, I’m back now.  I wont say that I wont ever return to digital – I’d like to try a nice new higher range Pentax in the future, but I’ve taken stock.  Be careful with those used DSLRs.

Above image edited to crop out the “line”.